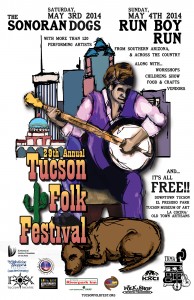 One of the country’s largest free festivals. The Tucson Folk Festival  with over 200 musicians from Arizona and the Southwest performing over 20 hours of family-friendly music, dance, food trucks and entertainment in El Presidio Park, downtown Tucson.

The center of Festival activity, including the TKMA. Kitchen Store and food & craft vendors is in El Presidio Park in downtown Tucson. All venues are easy walking distance from the Park. Performances take place on the following stages:

This year, we will again feature the  Young Artist’s Stage in a special time slot on one of the regular stages.  The festival will again include a Ballad Tree,  and the Acoustic Showcase which was a great success in 2009, its inaugural year, will also return to the Museum of Art lobby.   All venues are within easy walking distance from the corner of Church and Alameda.

Copyright © 2000-2016 Keller Williams ® Realty. - a real estate franchise company. All information provided is deemed reliable but is not guaranteed and should be independently verified. Properties subject to prior sale or rental. Each brokerage is independently owned and operated.